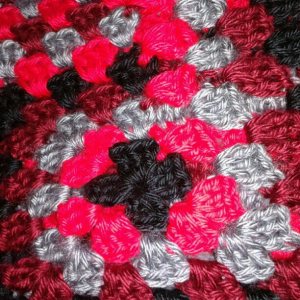 On Saturday afternoon, I was sitting on my coach a bit bored. It felt like something was missing from my life, and for a bit I couldn’t figure out what it was.

And then it hit me.

For the past several years, any weekend in November would largely be spent working on crochet projects of one sort or another — usually presents of one form or another.

So, why wasn’t I crocheting like mad this past weekend?

Unfortunately it’s because my body has decided that crochet is no longer a hobby I can manage.

I’ve always had to be careful with my wrists while crocheting. Anyone who looks at things I crochet says that my stitches are “tight” and that’s largely been due to how tightly I would hold on to the crochet needle. I didn’t have a loose, flowing motion.

This past January, my left wrist started giving me more trouble than usual. It wasn’t due to any overuse. It just seemed to happen over the course of a couple of weeks in January.

I originally thought that it would go away. That I could just rest the wrist and it would get better.

I went to an orthopedic and he put a shot into it that made it better, but said I would need to rest it.

The resting of the wrist lined up with me breaking my ankle and followed by my move to Clarksville, so there wasn’t much time to think about crochet anyway.

After my move in June, I started paying more attention to what was happening with my wrist. My new chiropractor has been awesome at treating it without needing any more shots, but it’s obviously that the hypermobility has passed the point of no return.

It makes me sad and angry that I might not be able to crochet again.

I was hoping to finish up some blankets that I had promised people, but I’m not even sure that’s going to happen.

I bought some craft supplies to do another craft for the holidays, but my heart just isn’t in it.